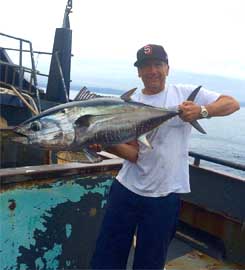 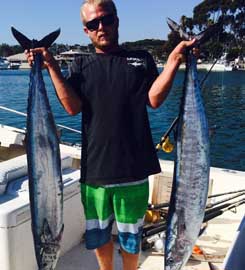 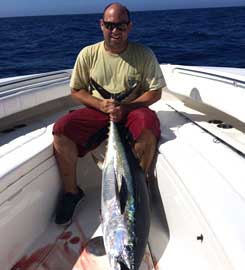 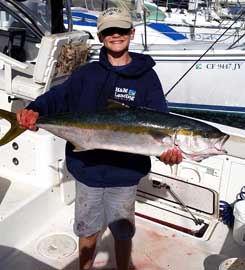 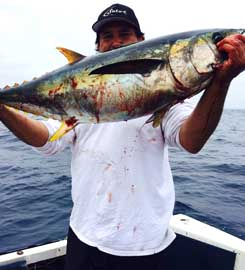 For 50 years, fleet has relied on one family

Like all good tuna boat fishermen here in the 1940’s, the Everinghams knew how to make bait.

But imagine having to do it for an entire sportfishing fleet and an armada of private boaters every day during the height of the fishing season when the fish and the fishermen have an insatiable appetite for bait fish.

That’s the chore for the Everingham Bros. Bait Co., a San Diego institution for the last 50 years. The business, which now employs its fourth generation of the Everingham family, is anchored at the same, exact location in San Diego Bay that it was half a century ago.

That’s when Adolphus “Buck” Everingham (deceased) and his two sons, Charles and Roy, bought it from Lyman McDonald.

And the truth is, Roy Everingham wasn’t all that thrilled about making bait.

“I hated it,” Roy said, laughing. “Catching bait was the worst part of tuna fishing. Throwing those nets and hauling in the bait just killed your back and hands.”

But Roy Everingham solved that by mechanizing the process, and today his son, Buck, 45, runs the operation. Buck said the crew has a combined 160 years in the bait-making business.

Roy, 75, is retired now, but he left the family business in capable hands. Buck’s son, Matthew, 19, when he’s not attending UCSD, helps at the company’s Mission Bay bait barge.

Buck started learning the business when he was 12. That’s when Roy started teaching him all the aspects of making bait, including the most important one of all, how to find it in a vast ocean. “Sometimes it looks like the shadow of a cloud,” Buck said. “Other times, it’s two different shades of green or even less than that. You really need a keen eye.”

For the Everinghams, it all started back in the post-World War II days. Albacore fishing had slowed to a crawl, and Roy’s father, the original Buck, and brother went to work for McDonald, who then owned Mac’s Bait. Soon, Roy tired of fishing tuna and joined them. And, before long, McDonald approached them about buying the business.

“I was reluctant at first,” Roy Everingham said this week at the company’s corporate office in Point Loma. I didn’t think a family business would work out.

” But Roy threw in, and the first thing the family did was build a new bait boat to replace the Old Californian.

Back then, there was competition in the bait business from Tex Brock, and there were only two landings, H&M and Point Loma. It wasn’t easy, Roy said. The two barges were next to each other.

Everingham likes to tell the story of the time Tex Brock hunk out a huge sign that said, “Bait Here.”

“I built a bigger sign that said, ‘Live Bait Here,'”Roy said, laughing at the thought of one-upping his competitor.

Other competitors came and went, but the Everinghams persevered.

Roy became the business’ driving force when his father, only 52, died a couple of years after the family bought it. He also bought out his brother, Charles, in 1967, 12 years before Charles died.

Along the way, Roy perfected a boat design and system that allowed the crews to bottom out the boats, sometimes with the bow on the beach, to net the inshore bait schools. Considering the EBBCO is a 118-foot boat, that’s risky business.

“It definitely gets hairy, a real adrenaline rush,” said Buck, who can run any of the fleet’s five boats in a pinch. And, like his father, he flies a plane, mostly at night, to scout for schools of bait.

A second system, also designed by Roy, that became a big part of the family business is the technique for netting and boating tons and tons of bait at once. Roy had a boat-builder design the Aquarius around his idea. It’s actually a family and company secret.

“We do it with great speed because the longer bait stays in the nets the more it gets hurt,” Roy said. “We can load three tanks in under 15 minutes, and it used to take an hour to load a couple hundred scoops.”

The family had its share of disasters, none worse than the time one of its captains sank the boat, Veteran, in 1979 by overloading it early in the morning. The bait sounded at daylight, as it often does, and the movement rolled the boat.

Tony Sanchez plays a critical role in the operation as the port engineer, Buck Everingham said. He not only repairs the boats, but the Everingham captains communicate with Sanchez from the water. Sanchez then orders needed parts and has them ready when the boats return to port.

“Tony is a big reason we’re so reliable,” Buck said.

During the peak of the fishing season, four boats will be out catching bait every day, a minimum of 100 days straight. And it’s something the fleet greatly appreciates and couldn’t live without.

“To have an operation like the Everinghams, it’s literally the engine that drives this fleet,” said Lance Withee, owner of the sportboat Vagabond.

Said Rick Podolack, Captain of the Holiday: “They’re under tremendous pressure to keep the fleet baited up, but they always come through.”

The Everingham boats range from the Mexican border to Newport Beach and out to about 30 miles. The deeper it is, the more difficult it is to make bait, Roy Everingham said. A Department of Fish and Game boat once recorded a school of anchovies that went from the surface to seven miles deep in 20 minutes.

Buck Everingham said he will continue to make the necessary changes to keep the business current. Today, the relationship between Roy and Buck is not only that of father and son, but of two business partners who, like any father and son or longtime business partners, had their differences. But Buck said they always worked things out, always put the family and business before all else.

Asked what his best memories are from his years of making bait, Roy Everingham spoke for himself and Buck, saying: “When I was flying back at the crack of dawn, and all the boats behind me were loaded with bait. Those were the best times because I knew an hour from that I’d be in the sack.”

This fishing company does not use GoFish fishing report.

This fishing company does not use GoFish Reservation System.

We have more than just the directory listing

You can find out more about which cookies we are using or switch them off in settings.

This website uses cookies so that we can provide you with the best user experience possible. Cookie information is stored in your browser and performs functions such as recognising you when you return to our website and helping our team to understand which sections of the website you find most interesting and useful.

Strictly Necessary Cookie should be enabled at all times so that we can save your preferences for cookie settings.

If you disable this cookie, we will not be able to save your preferences. This means that every time you visit this website you will need to enable or disable cookies again.